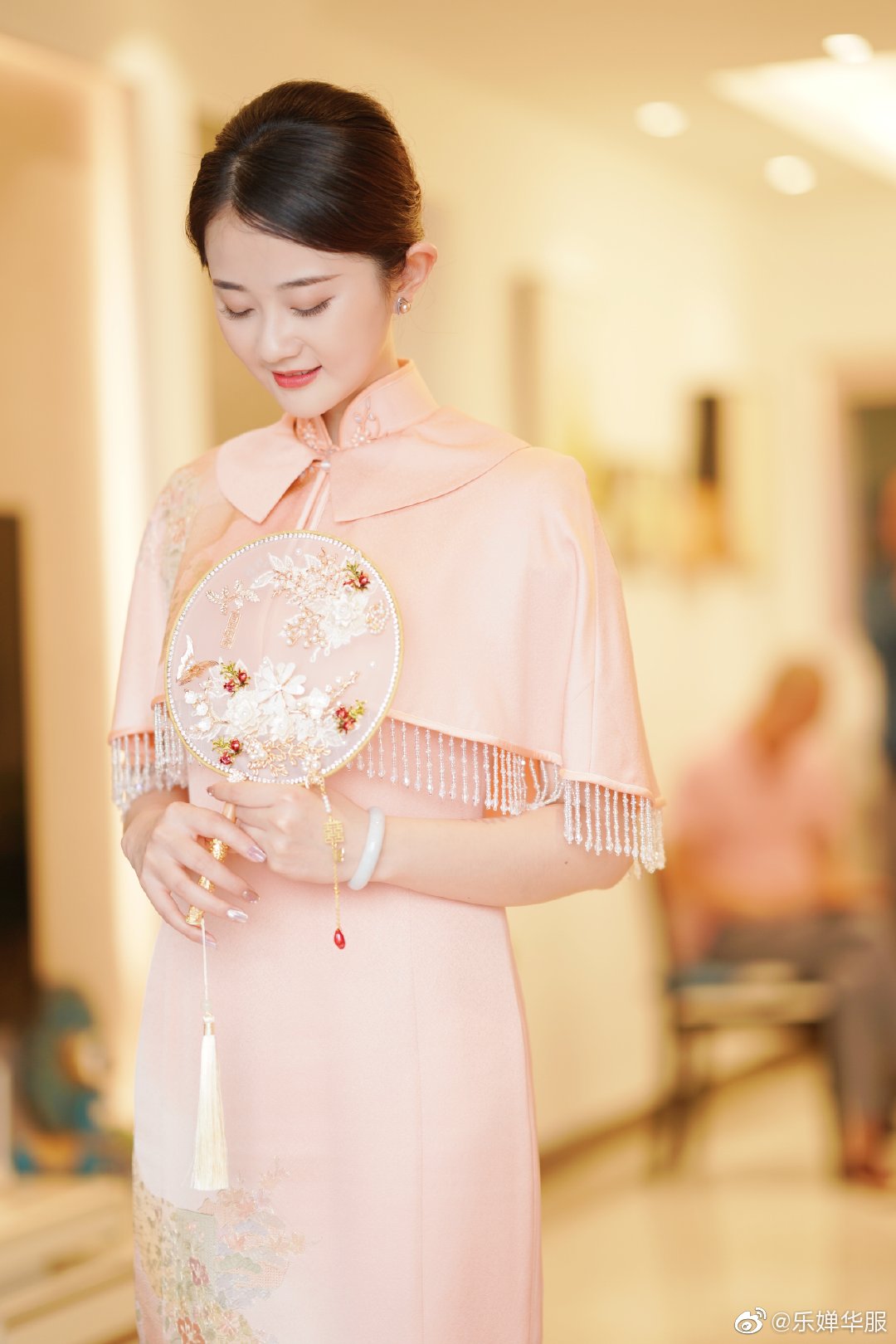 I have ever seen the happiest bride with a smile.. She was married to love ….. The Bride dress was dressed in a ….  Dressed in a beautifully soft apricot pastel pink  Blossoming delicately embroidery  romantically elegant Chinese hand crafted texturing embroidery youthfully cheongsam with embroidery delicately Chinese texturing Painting of moonlighting  pearl buttoning assembling the Qipao- Cheongsam ….with beautifully dressed inspiration of a  Beautifully Chinese pavilions that resides on lakeside in the distance with a spring of sakura cherry peach blossoming blossoms pink silk embroidery pink ribbon painting of a Pavilion lake side landscape with delicate  trimmings ….. With the soft texturing Qipao- Cheongsam featuring with traditionally hand sewn crafted Tailoring heritage in which embroidery is hand sewn in Original Shu embroidery techniques on to a very durable heavy silk. ….The warm soft apricot pastel pink was more in line with her temperament seem to fit the bride’s brilliant smile. Her temperament expressively was the retro Italian matte silk, the luxurious colours of pink and gold, are prosperous and restrained…..

The elegant and retro cheongsam exudes a bony temperament from the inside out! …. Women, you should wear cheongsam once in your life, and you should choose a cheongsam that suits you for your temperament.

Wearing with the non-traditional assemblages of the pearl, buttons instead of back zip to fasten the dress making wearing authentically of a Modern – Qipao- Cheongsam in having a back zip which makes it great for everyday wear as to retain the decorated breast pearl trimmings with pearl tassels on the short sleeves…The dress remising of the Great times of Shanghai with the incredible attention to detail with its pearl trimmings and tassels of a fun everyday work to evening wear.

In an refreshing spring texturing with intricate hand sewn embroidery pavilion Qing- Dynasty Collars curves with embroidered texturing pearl moonlight buttons with, with softness according to the body creating a slender sophisticated intelligent femininity curves…  embroidery with of with ancient Chinese pavilion gardens on the lakeside pavilions on the prosperity Forbidden City reminiscing of Ancient Chinese painting with one stitch, one thread, one world, one brocade, one satin one silk….